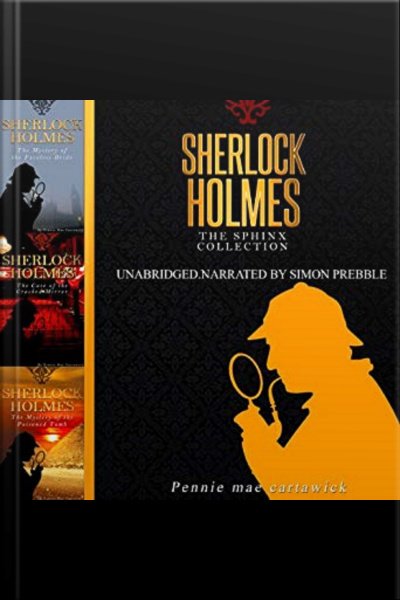 Three Compelling Sherlock Holmes Mysteries In One Book. Narrated by the celebrity actor Simon Prebble who is also known as an award winner for the best voice in fiction.
STORY ONE: The Mystery of the Poisoned Tomb.
"Ah good morning, John, if we do not hurry then we shall miss the unveiling of the sarcophagus." He leaped up, feeling much better than I did, and chased me into my own room so that I could get changed. There was a large crowd who had come to see the tomb. Holmes and I made our way through. I noticed Ini intently watching us. Mr. and Mrs. Fairfax were standing in the tunnel with someone from the Department of Antiquities. They had been waiting for us. The five of us made our way through the tunnel and back to the tomb. I couldn't wait to see if there really was a Pharaoh in the next room.
STORY TWO: The Case of the Cracked Mirror.
The fireman had seen a skeleton, wearing a dress coat, whose head was aflame. I was deeply worried for the missing young woman. If she had been taken by the opera ghost, be he flesh or spirit, how would she fare if she rejected his 'love'? All worries were momentarily forced out of my head when a sudden squawk rang out across the opera house. "I cannot believe this! Me; a suspect."
STORY THREE: The Mystery of the Faceless Bride.
The bride carried no decaying roses but her bridal dress was torn and burnt. Her bare legs, starved needle points, staggered disjointedly. The veil hung low over her face. I had my pistol, however I could not shoot. If it was a ghost the bullet would surely pass through, if it was flesh then I would be shooting dead a woman. Her hands, the fingernails long and cracked, lifted up the veil. Her face! Even in the darkness I could see its ruin. The eyes had been snatched from its sockets, the nose sunken in; all that was left was the mouth. Thin, melted lips parted to reveal brown chipped teeth.